The Chianti region extends between the provinces of Florence, Siena and Arezzo and mark the East border of this area with Valdarno and Valdichiana. The region is mainly hilly and the municipalities belonging to this area are part of the production area of the  Chianti, a red DOCG wine. 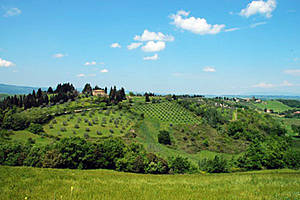 From a geographical point of view, the Chianti borders are not very clear and are still object of never ending discussions, while from a historical point of view, the Chianti region is considered formed by the municipalities of Gaiole, Radda and Castellina. In the past it was named the old Lega del Chianti which became later the province of Chianti included in the province of Siena. In 1932, when the wine area Chianti, which included the sub-area Classico and the areas belonging to the current province of Florence, was born, the geographical area has enlarged.

Many places and even the municipality of Greve in Chianti, during the years have also changed toponymy, adding “in Chianti” to their original name. For instance, in 1716 Cosimo III de’ Medici already considered as Chianti the areas close to Greve and Panzano.

This area, famous all over the world thanks to the production of the Chianti DOCG wine ( www.chianticlassico.com ) produce also other important wines some of which are know as SuperTuscan ones. The olive oil is also a product of excellence of this reagion.

A journey in the gastronomic Tuscan tradition cannot but start from the food which were in the past “poor” and that have become instead, thanks to the great quality of the ingredients, a real classical of the international cuisine. The ribollita (vegetable soup), fegatini di pollo (chicken leaver), collo ripieno (stuffed chicken neck), trippa (tripe), bistecca alla fiorentina (Florentine T-bone steak), fettunta (Tuscan bread flavoured with olive oil, salt and garlic), pappa al pomodoro (tomato soup), peposo (spicy stew)  are some of the typical Tuscan dishes one can taste in the trattorias and restaurants.

To enjoy at one’s best all what this part of the Tuscan countryside offers, the best solution is to rent a villa, a farmhouse, a castle or an apartment.

Between cypresses, olive groves and wine yards immersed in the green countryside, surrounded by lavender and rosemary, the Tuscan farmhouses are the perfect place where to spend a relaxing holiday in the nature. To rent them is very easy with Vacavilla. Choose an apartment or a private villa among the Vacavilla holiday homes collection in Chianti. Stone farmhouses with swimming pool and furnished gardens for a perfect holiday in the open air.

They can be rented for a week or more and even for a short break.